This totally ruined my day, you guys… :'( 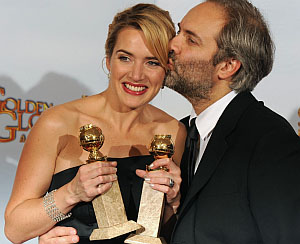 Oscar winner Kate Winslet has split from her director husband Sam Mendes after almost seven years of marriage. The Titanic actress wed American Beauty filmmaker Mendes in 2003 on the Caribbean island of Antigua. They have a son, Joe, who was born in December 2003, and Winslet also has a daughter, Mia Honey, from her first marriage to Jim Threapleton.

British beauty Winslet set up home with Mendes in New York City, but it was announced on Monday that they have now parted ways.

In a statement, a representative for the couple says, “They are saddened to announce they separated earlier this year. The split is entirely amicable and is by mutual agreement. Both parties are fully committed to the future joint parenting of their children.”

Kate Winslet breaks out her bikini south of the border!