Written by Annie
2 Comments   /   Leave a Comment?
Interviews/Articles Other Projects 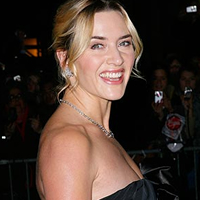 In these new “behind the scenes” shots the Oscar-winning actress, 35, lounges on a wooden table wearing black gloves and a one-shoulder dress.

In another the Titanic star sprawls on the floor wearing soft knits and loose grey trousers.

“The St. John collection is effortless and chic, and I think speaks to how real women live and dress today,” said the Golden Globe, SAG and BAFTA winner.

The creative director of the company, George Sharp, is thrilled to have the Titanic actress on board.

“Kate is an ideal choice for our new campaign,” he said. “She is an accomplished, beautiful woman with an extraordinary body of work, and one of the most admired actors of her generation.”

The campaign was photographed by Craig McDean at the historic Loew’s Theater in New Jersey, New York. The campaign will be launched in print in September.