Kate Winslet goes back to school 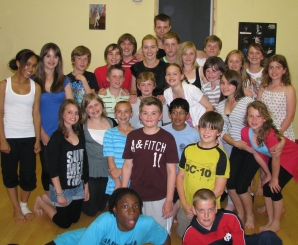 Starmaker pupils were well and truly star struck when the curtains went up to reveal former student Kate Winslet at rehearsals on Wednesday night.

The Oscar-winning actress paid a surprise visit to Blessed Hugh Faringdon School in Southcote to chat to the aspiring actors and offer some top tips.

She told them: â€œDonâ€™t be shy because I am very normal.â€

Oscar-winning actress Kate Winslet made a surprise appearance at her old stage school to share some top tips with the aspiring actors.

Starmaker pupils were thrilled to see the Reading-born superstar on their stage on Wednesday.

About 75 students gathered in the main hall of Blessed Hugh Faringdon School in Southcote for their regular Wednesday night rehearsals for their next production, Boogie Nights, completely unaware the award-winning Hollywood actress was just a few feet away behind a curtain.

Michelle Palin, membership secretary of Starmaker told getreading: â€œWe got them there under false pretences because they had no idea Kate was going to be arriving.

â€œThey were all sat there impatiently as teenagers do and we held open rehearsals for parents so they could see what we were doing with Kate as well.â€

The mum-of-two was revealed as the curtains were drawn and she was greeted by a huge round of applause and cheering from the starstruck students.

3 Comments on “Kate Winslet goes back to school”