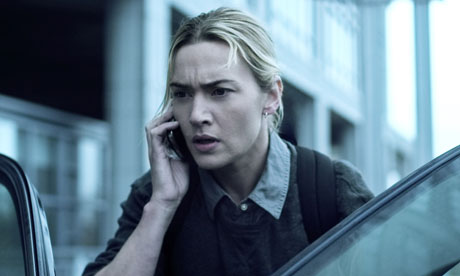 Steven Soderbergh and his Informant! screenwriter Scott Z. Burns explore the speed at which both a virus and information travel in their new thriller Contagion. It’s a chilling look at the consequences of a pandemic spiraling out-of-control, lent weight and gravitas by an A-list cast featuring the likes of Matt Damon, Gwyneth Paltrow, Kate Winslet, Jude Law and Marion Cotillard.

Contagion‘s star-studded ensemble recalls ’70s disaster epics such as The Towering Inferno, and this may be the closest Soderbergh gets to making a film of that ilk. As always with the Ocean’s Eleven director, the work feels uncompromised and uniquely his. Big-scale spectacle is shunned in favor of a cool, clinical exploration of how government and society reacts to the crisis. Soderbergh admirably manages to maintain his experimental edge in a conventional genre set-up. This is arty moviemaking dressed up as popcorn entertainment, Traffic with a transmission virus.

The film begins with Gwyneth Paltrow’s Beth Emhoff returning home to her family after a business trip. We learn that she’s cheated on her husband Mitch (Matt Damon) with an old flame (Soderbergh in a voice cameo) and is suffering from cold-like symptoms. Within days she’s convulsing on the kitchen floor and later dies in hospital. Mitch’s son also passes away, and as panic intensifies he and his daughter find themselves quarantined in their town as the disease spreads.

Far from the hysterics of a Roland Emmerich disaster thriller, Contagion is a more measured take on humanity in crisis. With its soundtrack of rattling coughs and urgent score from Cliff Martinez, it propels along at brisk speed, building up tension and anxiety. It’s sweaty-palm, finger nails-digging-into-armrests cinema, and the bumping off of Paltrow within the opening moments quickly hammers home the fact that nobody is safe.

Many characters are introduced and as a result it’s difficult to form strong attachments amid the whirlwind-like narrative as it spans continents and government departments. Only Damon’s distraught father carries emotional resonance, particularly when he dresses up his living room so his daughter can have a prom night with her boyfriend.

Contagion‘s social decay and disorder shares parallels with the seminal TV movie Threads. Soderbergh is never quite as brutal or terrifying as that 1984 BBC production, but as paranoia and unease seeps through the screen it’s quickly evident that he and Burns have an authentic grasp on the mechanics of a disease-led downfall. This isn’t the Oscar-winning director at his best, but it’s compelling viewing nevertheless.

Candids: Arriving at the taping of “The Graham Norton Show”

“Contagion” film is not far from the truth, warns virus scientist