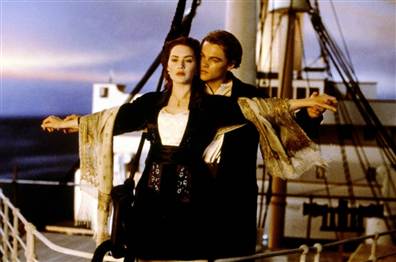 Titanic is sailing back into theaters around the world April 6, 2012.

The date was chosen to coincide with the 100th anniversary of the ship setting sail (April 10).

The 3D conversion is being overseen by Cameron â€” who wrote, directed and produced the movie â€” and his Lightstorm producing partner Jon Landau, who also produced.

“There’s a whole generation that’s never seen Titanic as it was meant to be seen, on the big screen,” Cameron said. “And this will be Titanic as you’ve never seen it before, digitally remastered at 4K and painstakingly converted to 3D. With the emotional power intact and the images more powerful than ever, this will be an epic experience for fans and newcomers alike.”

Candids: Kate and Louis Dowler at the Heathrow airport