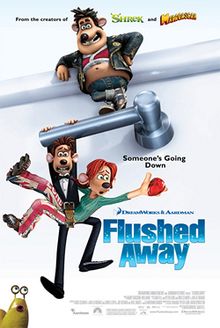 Roddy is a decidedly upper-crust "society mouse" who lives the life of a beloved pet in a posh Kensington flat. When a sewer rat named Sid comes spewing out of the sink and decides he's hit the jackpot, Roddy schemes to rid himself of the pest by luring him into the "whirlpool." Sid may be an ignorant slob, but he's no fool, so it is Roddy who winds up being flushed away into the bustling sewer world of Ratropolis. There Roddy meets Rita, an enterprising scavenger who works the sewers in her faithful boat, the Jammy Dodger. Roddy immediately wants out, or rather, up; Rita wants to be paid for her trouble; and, speaking of trouble, the villainous Toad - who royally despises all rodents equally, making no distinction between mice and rats--wants them iced... literally. The Toad dispatches his two hapless hench-rats, Spike and Whitey, to get the job done. When they fail, the Toad has no choice but to send to France for his cousin - that dreaded mercenary, Le Frog.

Aardman’s first fully-CGI feature film. The reason for using computer animation, instead of the studio’s trademark clay animation, was the numerous scenes involving water, which is nearly impossible to do convincingly in stop-motion.

While Roddy (Hugh Jackman) and Rita (Kate Winslet) are in the fridge, one of the frozen rats is parodying Han Solo, in his famous carbonite pose from Star Wars: Episode V – The Empire Strikes Back (1980).

At the beginning of this movie, when Roddy (Hugh Jackman) is going through his wardrobe, the outfit he forgoes, for the Elvis Presley-style rhinestone jumpsuit, is a replica of the original Wolverine outfit from the comic books. Wolverine is the role that made Jackman famous.

Several of the names found in the DVDs, and on Rita’s father’s cast, belong to the children of producers, directors, and other people involved in the movie.

When the stove falls through the floor of Rita’s house, a cockroach that was sitting behind it can be seen holding a book. The book is Franz Kafka’s novella “Metamorphosis”, the protagonist of which turns into a (non specified) insect, which is often translated as a cockroach. The cockroach appears to be reading a French translation: the title “La métamorphose” is clearly seen, while the Ka- in Kafka is obscured by the insect’s “hand”.

Inside the ship, after Roddy has broken the ruby, there is a box which has Shaun the Sheep on it. Rita also moves a mannequin whose head is Gromit. Shaun and Gromit are Aardman Animations characters.

When Roddy (Hugh Jackman) and Rita (Kate Winslet) are about to be “iced” in the fridge, you can see that the control panel The Toad (Sir Ian McKellen) is using, is an early Atari 2600 game console (all the controls on the front). The game plugged into the unit is called “Froggie”, a play on the old game “Frogger”. When facing The Toad, the label on the back of the unit warns of “no service usable parts inside”, and “opening the unit voids the warranty”.

“You know everything about me, warts and all. I don’t even know what you do.”

“What are you, some kind of rat boomerang? Give me back my ruby!”