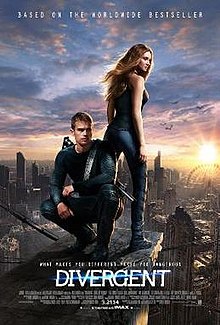 Set in a futuristic dystopia where society is divided into five factions that each represent a different virtue, teenagers have to decide if they want to stay in their faction or switch to another - for the rest of their lives. Tris Prior makes a choice that surprises everyone. Then Tris and her fellow faction-members have to live through a highly competitive initiation process to live out the choice they have made. They must undergo extreme physical and intense psychological tests, that transform them all. But Tris has a secret that she is Divergent, which means she doesn't fit into any one group. If anyone knew, it would mean a certain death. As she discovers a growing conflict that threatens to unravel her seemingly peaceful society, this secret might help her save the people she loves... or it might destroy her. 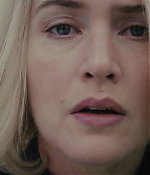 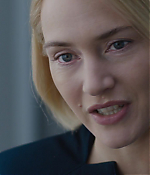 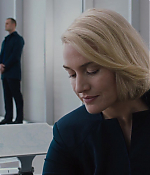 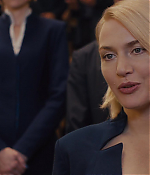 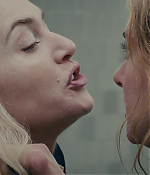 One choice can transform you
What Makes You Different, Makes You Dangerous

The sound that Peter (Miles Teller) makes when Tris (Shailene Woodley) punches him in the throat is genuine. Woodley didn’t want to hurt Teller, so she was being timid. As filming continued, Teller and Woodley got more aggressive and during one take, Woodley actually hit him in the throat, which Teller wasn’t expecting. This is the take that is in the movie.

Kate Winslet was five months pregnant during filming. Despite the fact that she was only on set for four weeks, it reached the point where her pregnancy was evident. She was shot above the waist, or was directed to carry folders, files and iPads.

Initially, the budget of the film was $40 million but Lionsgate later increased it to $80 million due to the success of The Hunger Games (2012).

The fence around Chicago is modeled after the Duga-2 antenna array. A Soviet era over-the-horizon radar transmitter located in Ukraine, within the Chernobyl Exclusion Zone. The transmissions from the antenna caused interference with commercial and amateur radio. NATO codenamed Steel Yard, also known as the Russian Woodpecker due to the 10hz repetitive signal.

The producers were aware of the story’s surface-level similarities to The Hunger Games, but felt that the urban world of Divergent would contrast with the rural feel of Hunger Games and help differentiate the two.

Kate Winslet came onto production a little later than most of the other cast members. As a result, she deliberately didn’t act too friendly towards them – hoping it would help with the tension whenever Jeannine was on screen. After a few days, she started being nicer.

Some of the violence from the book was toned down in order to ensure a PG-13 rating. There’s less visual violence (ie. blood spatter) and more “emotional violence.”

Jeanine Matthews : The system removes the threat of anyone exercising their independent will. Divergents threaten that system. It won’t be safe until they’re removed.

Jeanine Matthews : The future belongs to those who know where they belong.

Jeanine Matthews : Maybe you’re not quite as “Dauntless” as you thought you were.
Beatrice ‘Tris’ Prior : You’re right. I’m “Divergent”.
[catches hypo tossed by Four and plunges it into her neck]

Jeanine Matthews : You’re a poor blend of impulses and impurities.

Jeanine Matthews : Maybe you’re not as Dauntless as you think you are.
Beatrice ‘Tris’ Prior : [injecting Jeanine with serum] No. I’m Divergent. Stop the simulation and wipe the program.

Jeanine Matthews : It’s hard to let go. Faction before blood, it’s an important ideal, but sometimes difficult to fulfill. It goes against our fundamental human nature. But that’s exactly the weakness we need to overcome.
Beatrice ‘Tris’ Prior : You think that human nature is weakness?

Jeanine Matthews : Amazing, isn’t it? Everything we think of that makes up a person – thoughts, emotions, history – all wiped away by chemistry.