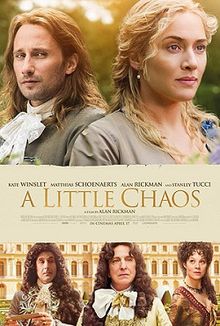 Famed builder Le Notre is tasked with building an ethereal palace for King Louis XIV (Rickman) that transcends beauty. Le Notre hires Sabine de Barra (Winslet) to design and construct the outdoor ballroom, and is soon captivated by her beauty. Sabine is equally enthralled by Le Notre though she is struggling to deal with her past. Through the trials of building the garden the two starving artists come together.

Passion is in our nature.
From incredible passion grows incredible beauty.

Kate Winslet’s daughter, Mia, appears in a scene at the Louvre. She is sitting on a chair alone when Sabine walks into the room before a crowd of people follow at minute 33:17.

Some of the costumes from the television show The Tudors (2007) were altered and reused in this film. Costume designer Joan Bergin was involved in both projects.

The real André Le Nôtre, the landscape architect who designed the gardens of Versailles and many other palace grounds, was 25 years older than Louis XIV. The film’s time-line of a year or so includes the death of Maria Theresa, Louis’ queen. This occurred in 1683, when Louis was 45 and Le Nôtre was 70. At that point, Le Nôtre had been working on the gardens at Versailles for more than 20 years.

Kate Winslet was three months pregnant with her son Bear Blaze when she completed filming. She announced her pregnancy two weeks into shooting.

Before filming their first sex scene, Kate Winslet went to Matthias Schoenaerts’s trailer and told him that she was pregnant, he congratulated her and made her feel relaxed during the sex scenes, “He was very sweet and able to move me in ways that were favourable to my physical state”, Winslet told. Schoenaerts also kept his pants and his socks on during the scene.

The film is set in France but was shot entirely in London.

Kate Winslet did her own stunt in the scene where her character falls into a weir. She was pregnant but didn’t tell anybody because she knew they wouldn’t let her fall in if they knew.

Though Le Notre was a real person, Kate Winslet’s character Sabine is fictional, there would be no woman with a profession at that time. Alan Rickman told that he loved the idea of “putting a completely fictitious character in the middle of a known bit of history.”

This is Winslet’s and Rickman’s second collaboration in a film. They starred opposite each other in “Sense and Sensibility” in 1995. They are married at the end of that one.

Kate Winslet and Jennifer Ehle were both in Steven Soderbergh’s film Contagion (2011).

The King tells Mme De Barra that the woman he wants to marry is very pious but is not royal or an aristocrat. This describes Mme de Maintenon, the King’s second wife, who he did indeed marry secretly (as per Mme De Barra’s suggestion).

King Louis XIV : And what protection can the gardener afford this rose from the harsh elements of change?
Sabine De Barra : Patience, care, and a little warmth from the sun are our best hope your Majesty.

André Le Notre : This abundance of chaos… is this your Eden?
Sabine De Barra : My search for it.

Sabine De Barra : I must apologize if this adds to the turmoil.