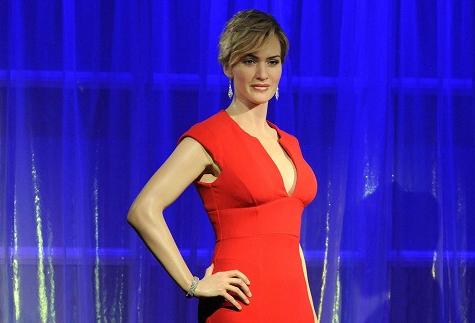 The Titanic star is a new addition to Madame Tussauds and has been placed with other British acting talents such as Dame Helen Mirren and Dame Judi Dench.

Model-makers spent months perfecting the figure of Winslet, 36, who won an Emmy for her title role in miniseries Mildred Pierce earlier this year.

The wax replica has been draped in the red cap-sleeve Elie Saab dress which she wore to collect her prize at the ceremony.

Recent additions have included Rihanna and Fergie from the Black Eyed Peas.

Rihanna’s figure features one of her many tattoos, which starts on the right side of her stomach and extends so it is parallel with her bum cheek.

The model stands alongside Britney Spears, Lady Gaga and the late Amy Winehouse in the museum’s music section.

A sexy Kylie Minogue wax model caused controversy when it was unveiled in 2002.

The singer was posed on all fours, dressed in a red silk basque and thigh-length leather boots, in racy underwear.

The skirt on the figure reportedly had to be lengthened after fans kept lifting it up to look at her famous bottom.