“It’s so nice to attend an awards show and know that you’re actually going to win!” 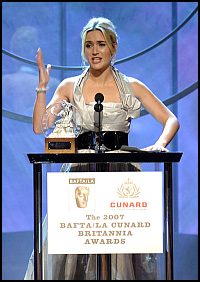 Kate Winslet, accepting her Artist of the Year award last night at the BAFTA/LA Cunard Britannia Awards. Clearly, Kate was joking about last award season, when she was nominated for â€” but didn’t win â€” Oscar, BAFTA, Golden Globe and Screen Actors Guild awards for her lead role in Little Children. That’s a lot of gowns to put on for nothing. At least wearing this silver satin frock was worth it!

Don’t count Winslet out of the 2008 Oscar race. Her Oscar-winning husband, Sam Mendes, has directed Winslet for the first time in their upcoming film, Revolutionary Road (due out Dec. 19), based on a book by Richard Yates about a 1950s suburban Connecticut couple who decide to leave the consumer culture behind and move to France with their children and their problems.

In a retrospective mood last night, Winslet listed her career mentors and what they’ve taught her:

3 Comments on “Itâ€™s about time Kate Winslet wins an award!”